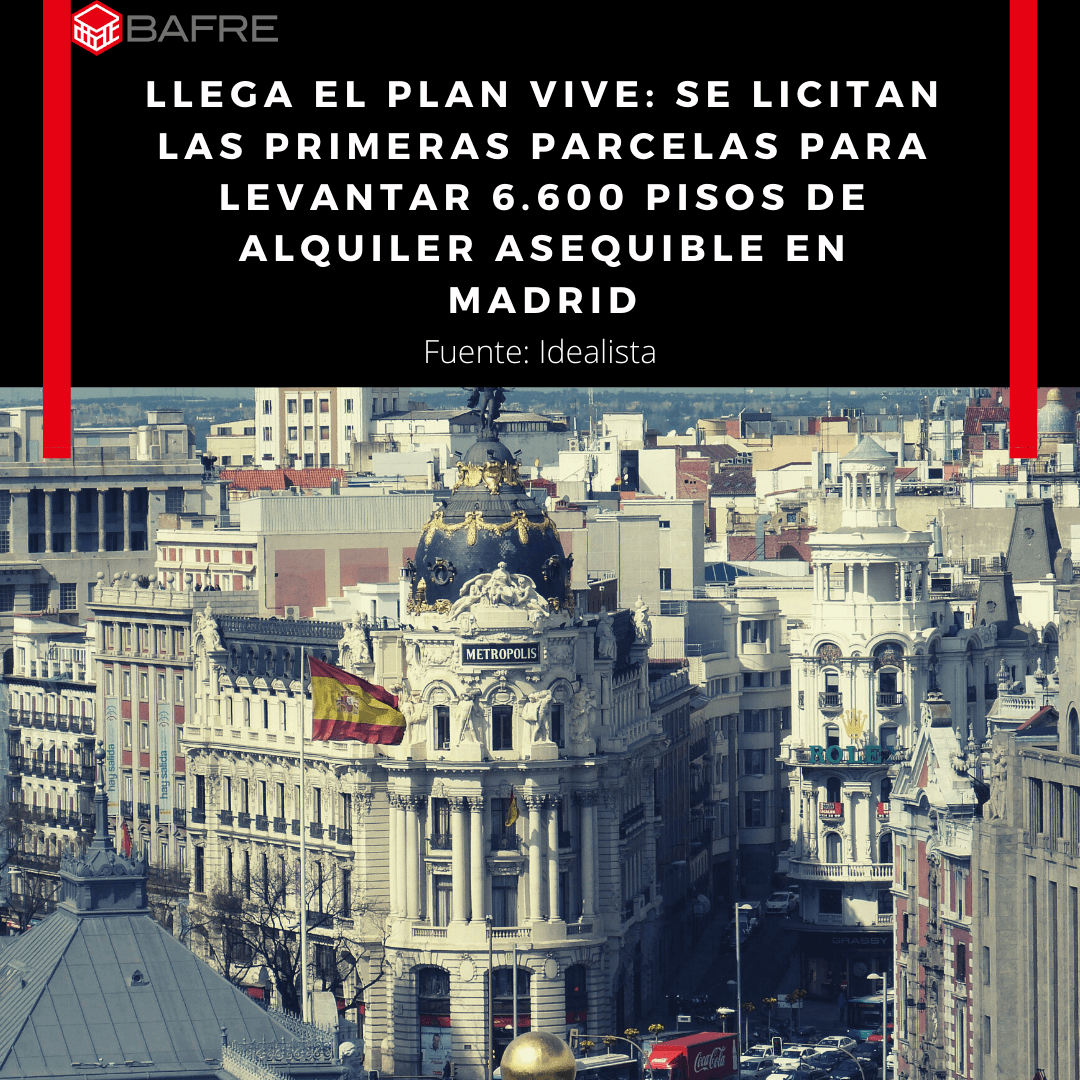 The Community of Madrid definitely gives the green light to Plan Vive, a program that contemplates the construction of 15.000 affordable rental housing throughout the region throughout the legislature.

And it is that the Official Gazette of the region (BOCM) has already published the procedure to tender the concession of the first 46 plots, where they will develop 6.646 households. The lands are in a total of 14 municipalities: Madrid, Torrelodones, Alcala de Henares, Old Colmenar, Getafe, Saint Sebastian of the kings, Three songs, Torrejón de Ardoz, Mostoles, Alcorcón, Navalcarnero, Humanes of Madrid, Velilla de San Antonio and Pinto.

As stated in the document sent by the Community of Madrid, these plots (that are owned by the region) will be awarded through public domain administrative concessions to third parties, who will carry out the activity of promoting these homes under lease. And add that, with the opening of the tender procedure, The Special Conditions and Technical Prescriptions that are to govern the entire process are approved. They will be published by means of an announcement in the Administration's Hiring Profile, through the Portal of Public Procurement of the Community of Madrid.

David Perez, Regional Minister of Housing and Local Administration, stresses that “with its publication in the BOCM, the Community of Madrid kicks off one of the most ambitious housing rental projects in Europe, in recent years”. And he adds that the scale of the project “It is equivalent to more than a third of all the annual production of the real estate sector in new housing in the Community of Madrid or, for example, two thirds of all the housing to be promoted in Madrid Nuevo Norte, and that, so, it will become a great lever for economic and social development unparalleled in Spain and Europe from public initiative and private collaboration ".

According to official calculations, the plan will mobilize around 700 million euros of investment, will create some 57.000 jobs per year (derived from the construction and operation of the flats) and will benefit 17.000 tenants, who will pay a lower rent than the market currently marks. The Community estimates “an annual savings in the average market rent of 19 million euros and with an impact on regional GDP, throughout the grant period of 4.428 millions of euros, in addition to generating 719 million euros for the different taxes that the Public Administrations will receive”.

The objective of the Plan Vive Madrid is to put up to 25.000 homes for the next 8 years, 15.000 of them during the current legislature.

With this program, the region seeks to facilitate access to housing for different groups, as under 35 years, large families and people with disabilities, in addition to contributing to increase the supply in the rental market
Madrid with prices significantly lower than market prices. To carry out this plan, the Community of Madrid has until now 1,2 million m2 spread over 43 municipalities of the region.

On the other hand, autonomy wants to achieve efficient management of public assets, “with the optimization of your yields, direct and indirect, economic and other, always linked to public interest purposes. The placing on the rental market of this significant number of homes will reduce the rental market tension in Madrid through affordable prices”, ensures the regional government.

The regulations include the regulation of the procedure to be followed for the allocation of housing, as well as its regime of use, the promotion of housing on land of supra-municipal networks, the fate of the houses, the constitution of an interested list and its publicity. The articles also contemplate the possibility of establishing housing reserves and their allocation procedure, in addition to the requirements for access to housing, the legal regime of lease contracts and their control by the Administration.