Last January they entered the records of all Spain 47.289 home buying and selling operations.This being the best monthly figure since May 2008. That is to say, he best year start in a decade.

Likewise, Are the second-hand homes those that occupy most of the transactions. Logging up to increased 23% more in relation to the same period of the previous year.

Last January they entered the records of all Spain 47.289 purchase and sale operations household, a figure that represents an increase in 23,1% regarding the same data from a year ago and the highest monthly figure since May of 2008, that month they were sold in 49.647 units. In fact, as shown in the graph below, is he best year start in a decade.

They are data from the Statistics National Institute (OTHER) that show how with the year-on-year advance of January, Home sales chain nine consecutive months on the rise. In monthly terms -January of 2018 about december 2017-, home sales skyrocketed a 46,8%, its biggest monthly rebound in a month of January for at least five years. 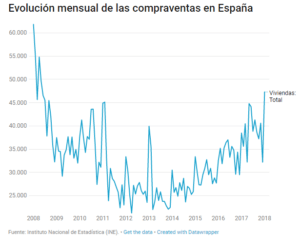 "January is usually a good month for buying and selling, but the start of 2018 has been especially positive, both in percentage of growth and in number of closed operations, since it is the best data since May 2008. A start to the year like this invites optimism in a sector that strengthens the strength of the standardization process”, points Fernando Encinar, idealista head of studies.

“The fact that the number of operations has grown in all the autonomous communities except in Estremadura it is also a sign of widespread demand recovery, although it is occurring at different rates. However, these data should alert us to the need to start building homes in some cities where supply is decreasing considerably while demand is increasing., otherwise prices could aggressively accelerate their rise. ", Add.

By typology, second-hand homes still monopolizing the vast majority of transactions. Specific, recorded an increase in 23% in january in relation to the same month of 2017, until total 39.017, while the sale of new homes advanced a 23,5% in year-on-year rate, until 8.272 transactions. He 90,4% of the homes transferred by merchanting in the first month of the year were free homes and the 9,6%, protected. The sale of free homes increased by 24,1% in January in annual rate, up to add 42.745 transactions, while the operations on protected housing advanced a 14,5%, with 4.544 transactions.

The Valencian Community is on the rise

Last January the largest number of merchantings of homes For each 100.000 population occurred in the Valencian Community (190), Baleares (174) and Cantabria (144). Andalusia it was the region that carried out the most operations on housing in the first month of the year, with 8.988 sales, followed by Valencian Community (7.409), Catalonia (7.334) and Madrid (6.526).

All the communities increased the number of merchantings of houses in January in year-on-year rate. The greatest advances were registered in Asturias (55,7%), Valencian Community (40,5%) and Murcia (38,8%), while the smallest increases corresponded to Estremadura (1,3%) and Aragon (5,2%).