Madrid remains the largest pole of capital attraction at office market. In 2017, investment in the Madrid market was a 60% above Barcelona, until 1.324 millions of euros. Investors predict a 2018 with more activity due to the possible rotation of assets of the SOCIMIs,that in some cases meet the threshold of three years from the acquisition of their assets, and the funds value add to fulfill your business plan.

In 2017 the office buying and selling operations they reached a turnover in Madrid of 1.324 millions of euros and in Barcelona's 835 millions, monopolizing the capital the 61% of the total volume aggregate. Investments in this type of asset in the past year could have been significantly higher if more investment opportunities had been provided, due to the huge appetite of investors. In many cases, owners were reluctant to sell purchased real estate assets at another time in the cycle due to the difficulty of reinvestment.

The investment funds were in 2017 the most active vehicles in the office market, both in Madrid like in Barcelona. In Madrid more than 40% of the total investment for the year corresponded to funds, they displaced, along with the SOCIMIs, to other investors during the second half of 2017. In Barcelona, investment funds accumulated close to 37% of investment in the city in 2017, being undoubtedly the main protagonists of the last semester. 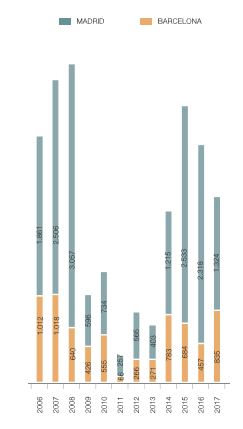 Regarding the most notable operations of investment funds, in Madrid highlights the sale of the Isla Chamartín business park to Tristan Capital and Zaphir Asset Management by 103 millions, intermediated by Knight Frank; the acquisition of the Miraflores Palace, located at number 15 of Carrera de San Jerónimo, by 60 million euros by Remer Investment; the Los Cubos building, by Henderson Park and Therus Invest by 52 millions. In Barcelona the sale & lease back of Mango's offices and design center in Palau de Plegamans for 100 million euros; and the purchase of the former headquarters of the Generalitat de Catalunya in Fontanella 8, by a Korean investor for 64,7 millions of euros.

Regarding SOCIMIs, it is worth noting the more than 100 million euros invested by Zambal SOCIMI in Albarracín 25, the 32,5 million from the purchase of Arturo Soria 336 and the Josefa Valcárcel project 40, both bought by Colonial, and the purchase by Onix Capital Partners by Manoteras 12, operation mediated by Knight Frank.

The institutional investors they were more active in Barcelona. They concentrated the 23% of the total investment thanks to the purchase of the Luxa complex, by Catalan West, by 90 millions, which will house the headquarters of Amazon.

Regarding the real estate companies, two operations stand out, both in the second half of the year: the purchase by Infinorsa of the 40% of Torre Serrano in Madrid, and the Can Ametller Business Park in Sant Cugat del Vallés by the Metropolis Group, both representing the 10% of the total investment in the second semester.

It is also appropriate to indicate the role of private investors during 2017. The purchases in Madrid by Fernando el Santo were highlighted 15 by José Lladó and, in Barcelona, the acquisition by Emilio Cuatrecasas (Emesa) of the numbers 444 and 632 from Diagonal Avenue, adding up 31.000 meters of the Finestrelles project. The private investor or family office he is an increasingly sophisticated and professional actor, able to invest in different real estate segments and thus compete with investors and institutional funds.

SOCIMIs are expected, with a discreet role on the supply side, be in 2018 one of the most active actors due to the rotation process of its assets, that in some cases meet the three-year threshold. There are also expectations in money value add, that meet their business plan through occupation and increased income.

The average price in the CBD of Madrid and Barcelona follows the increasing trend observed in recent years. Madrid exceeds 8.000 euros € / m², highlighting the purchase of the Serrano Tower by Infinorsa, Meanwhile in Barcelona the 6.900 euros / m², highlighting the purchase of Diagonal 444 by Emesa. The highest average price of the year was reached in Madrid at the Barclays headquarters in Colón 1, purchased by CBRE GI from Barclays for 14.000 €/m².

The yields have remained at stable levels and very much in line with other European squares, around the 3,75% in the Madrid market, due to lack of profitability in financial investments, and above all due to the strong expectation of income growth in the medium term. Barcelona has maintained levels of around 4%, with the expectation of being equal to the levels of the capital as soon as users and investors perceive a greater calm in the political tension.