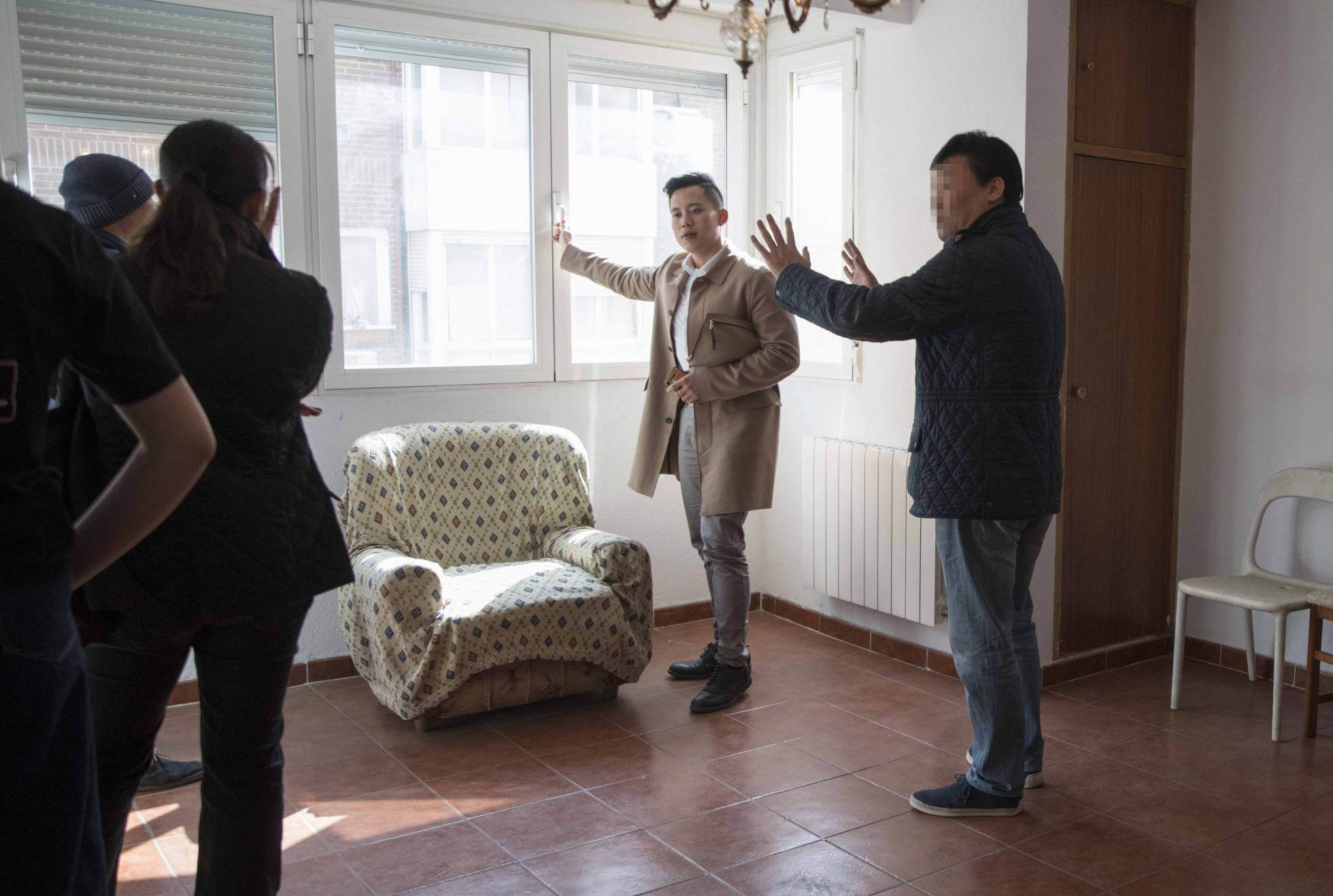 A Hispanic company brings clients from China to buy homes for more than 500.000 euros and get a visa in Spain

The bluish-gray glow of televisions throbs in some houses in this working-class neighborhood of Madrid. A tinted glass Mercedes van pulls up in front of a three-story brick building. Driver, dressed up, opens the sliding door and a Chinese family descends from the vehicle looking strangely around, as if he had suddenly landed on Mars.

-We have already arrived?—, asks the father.

The Han landed on Saturday morning in the capital on a flight from Beijing. The first two days they visited the city — Plaza Mayor, The Almudena, Sol— and since Monday they dedicate full days to examining apartments to buy. If you like one, you can spend an hour walking around the house, searching every corner; if not, it doesn't take more than two minutes to go knocking on the door.

They have already known the most exclusive places in the city, like the Retiro area, but this Tuesday they have dedicated it to looking at apartments in peripheral neighborhoods to buy three or four in a hurry if necessary, as many as it takes to reach the 500.000 euros needed to obtain the golden visa, a residence permit issued by the Government.

The agency's commercial that guides them holds the door of the modest lobby until the last member of the family has entered the building. Dont have a elevator, you have to go up on foot. The commercial has horrors to open the door of the Second A. When he succeeds, opens a window to the eighties. The living room, bathed in light, is presided over by an old tulip lamp. The apartment has two rooms but one behind the other, like train cars. Seeing this, the father, a businessman about 50 years you have made money selling gasoline additives, wrinkle the nose. The visit has been sentenced in less than five minutes.

Behind the investments in real estate of entrepreneurs, actors or athletes from China is located Bafre, a real estate company chaired by Long Fang Hu, a Spanish of Chinese parents from 28 years. To the 20, when the rest of the boys his age thought about cigarettes and discos, Long had founded a company and had two children. He discovered his country of origin by going to the Renmin University for an exchange, in Beijing: "It came in handy because it was more Spanish than Chinese, and I got a little bit down there".

Long —white shirt, Chinese pants, carefully styled— tell your story at your company's Usera office, the district in which Madrid's Chinatown is located. Real estate commercial started, looking for flats for Chinese residents who did not speak a word of Spanish. He was in charge of negotiating prices, translate, ask for a mortgage in the bank. He bragged about having a customer profile with 0% late payment.

With the entrepreneurial law approved by the Government of President Mariano Rajoy in 2013 to attract large foreign fortunes to the excessive Spanish housing stock he found a window of opportunity. He dealt with some compatriots who wanted to invest in Spain but it was not until 2016, when that same law was relaxed, who began to work seriously with clients he attracted to his offices in Beijing.

"Spain needed better promotion abroad. In China you competed with others who wanted to bring those fortunes to London, Paris, Toronto, best-selling country cities. I tried very hard to tell them that Spain was a stable country within the EU, with a very big story. They don't know that it was an empire there ”, Long reflects. His commercials - Spanish and Chinese - show customers an informative brochure that explains from the conquest of America to Iniesta's goal at the World Cup in South Africa in 2010.

Most Chinese clients buy houses as investments, according to this company that tripled its turnover of 2016 a 2017 -of 324.000 a 1,1 millions, according to the property registry—, doubled its number of employees, although it still had losses of almost 100.000 euros. Those investors rent the apartment until, after a time when it is supposed to be revalued, they put it back up for sale. In the event that they divest half a million euros they lose the benefits of the visa.

The granting of golden visa they have not stopped growing in Spain for six years. In 2018 were requested 16.029 and they were granted 12.634, according to the information provided by the Permanent Observatory on Immigration. Many buy too, explica Long, because they have a high concept of education in Spain. "The Chinese ask for two or three-bedroom flats near good colleges or universities. They are very interested in that ”.

Like the Han - generic name so as not to identify the real client who visited Madrid this week -, that one of the mornings they dedicated to know the Institute of Design and Fashion (IED). It's the place where the family's teenage daughter plans to study, about to finish high school.

Potential investors prepare their trip three months in advance. First they receive a dossier of the apartments you can buy and videos 360 to get an idea of ​​the spaces. "You have to feel, it's not just a product that you touch, it's something more", is one of the slogans of Bafre, which has seven offices in Madrid, one in Beijing and collaborations in Shanghai.

The final trip usually lasts a week. There are things that the visitor has trouble assimilating, as the roots to the heritage of the Spanish. Buyers in China, for example, they have a property right that lasts 70 years, after which the land becomes state property again. That causes the skyline to change radically every two decades. A building is pulled and lifted again without a wrinkle in the heart.

"So when Wanda's people bought the Spain building they lost time and so much money. It was a cultural problem, they should not imagine that this facade could not be demolished. If they had bought from us this would never have happened to them ”, cree Long.

The Chinese are surprised by Spanish hospitality. The Han hallucinated when someone on the street offered to accompany them to the place they could not find. The family's idea was to visit Madrid and Barcelona. Then they would make a comparison. But they liked an apartment in a development in the Pacific area, next to the Tierno Galván park: two bedrooms, two bathrooms and a large terrace. The decision came after visiting four floors on Monday and seven on Tuesday at the speed of light. The tinted glass van drove them all over Madrid.

On Wednesday they visited the Pacific flat again and began to negotiate the price.. It was discussing an adequate amount with a timer over their heads: the plane was waiting for them to return to Beijing.

"OUTSIDE CAPITAL GOES THROUGH EXHAUSTIVE CONTROLS"

The service of real estate agencies dedicated to the business of golden visa includes legal advice from a lawyer. José Ignacio Paniagua, expert in the law of entrepreneurs, is responsible for carrying out the entire procedure with Chinese customers, market in which it has specialized. Even after years working with clients of that nationality, he is surprised by the obeisances made by some, to which he hardly knows how to respond.

The first thing Paniagua does is to formalize a service contract with his office, Legal ONE, which has offices in Barcelona, Malaga and Madrid. The next thing is to go to a notary, where the client makes a power of attorney on behalf of the lawyers to carry out bank procedures, real estate and to obtain the residence permit. "Then it's time to open an account at the bank, where the client has to be present. Nobody can replace you in this process. At first the account is not operational, is on hold until it passes comprehensive anti-money laundering controls. Once you save that inspection it can be shipped from China. There they also make their inquiries, Clear", Paniagua explains.

Even when the money comes, expand the lawyer, money traceability is studied, where does it come from and where is it going. The Chinese customer, However, before it has already made a first disbursement in the form of a signal. Once the property is purchased, it is when the process to obtain this special visa begins. Applicants need health insurance, data on your assets, and a criminal record certificate from the past five years.