The purchase of homes by foreigners has meant 13,2% of the total units sold in Spain in 2016 and forecasts indicate that this figure will be exceeded by 2017, according to the ‘Residential Market Report’ elaborado por JLL. Spain is becoming the target of more and more foreigners to buy a home, a trend that will continue to gain strength in the coming years.

“Prices are still particularly attractive to many foreigners, specifically in certain coastal areas, therefore, foreseeably they will continue to approach a wide range of citizens of various nationalities”, explains the report.

These aliens, which are mostly European, they want “buy homes in Spain taking advantage of a very favorable situation in a country with a huge tourist attraction”. 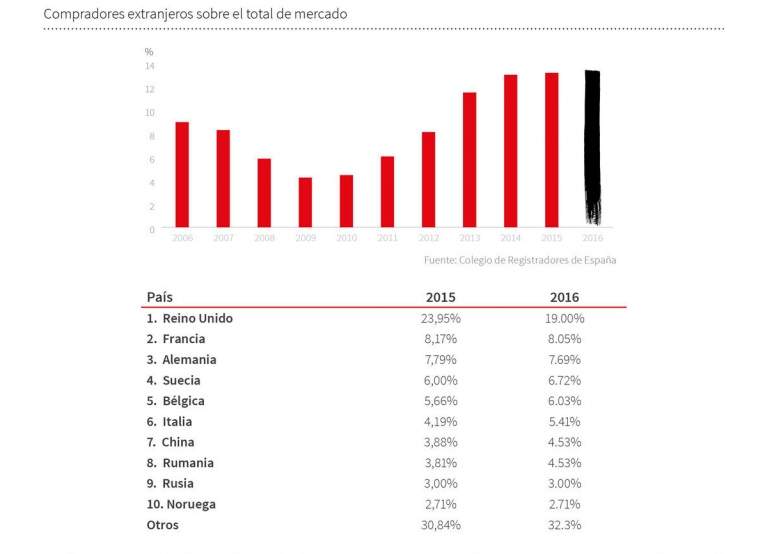 The positive trend that the market is going through is reflected in the investment volume, that at the end of the first semester of 2017 reached the 888 millions of euros, more than double that in the same period of 2016, when they joined 330 million in residential assets.

In fact, the volume of the first six months of 2017 slightly outperforms all of last year's investment, which stood at 802 millions of euros.

Both Madrid and Barcelona dominated investment demand transactions, although there were also operations in cities such as Valencia, Bilbao, Saint Sebastian, Seville and Malaga, thus promoting consolidation in the recovery of the residential sector, and evidencing the large amount of capital in the market in search of investment opportunities.

In this sense, the report indicates the change that is taking place in the promoter sector, in which the entrance of international investment funds that are allied with local companies is being redrawn, thus combining financial capacity and local knowledge.

So, examples such as HIG with Monthisa stand out, Pimco with Lar, KKR with Quabit or the Greenoak case, who has a fund ready to invest 900 million in the Spanish residential and for which it will establish alliances with local promoters specialized in different markets.

Professionalization of the rental market

The rental market in Spain has gained weight in recent years. In fact, in the decade between the years 2001-2011 rental housing increased by 51,1%, according to the Population and Housing Census 2011 prepared by the INE, an improvement that is causing a professionalization of the sector.

According to the Bank of Spain, the rental dwelling represents the 15,6% of total main dwellings (year 2015, latest available data), which supposes an increase of 5 points regarding 2000.