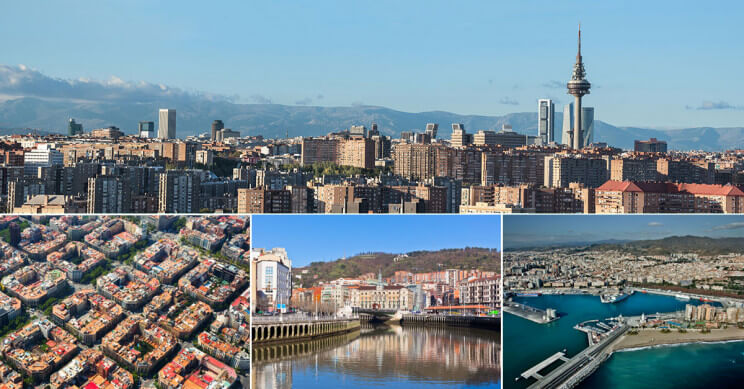 “Creemos que second-hand housing prices may suffer short-term drops that could be between 5% and the 10%”, Explain Mikel Echavarren, CEO of Colliers International Spain.

Raymond Torres, Director of Situation of the Foundation of the Savings Banks (Funcas), goes one step further and recalls that "the dynamics of price and the economy are closely associated. According to that guideline, with an estimated drop in GDP close to 9,5% according to consensus, the average price could experience an even greater adjustment, from between 10% and 20% ". The red inmobiliaria Remax it also moves in those figures, y alerta de que en algunas zonas podríamos ver una price reduction of up to 30%.

According Daniel Lacalle, chief economist of the securities company Tressis, “es lógico pensar que el precio de la vivienda pierda el aumento que había acumulado entre 2018 and 2019”And that there be a decrease in the price of housing due to the double-digit coronavirus of merchanting.

Situación bien distinta es la que se espera para the new work that, for the moment, parece salvarse de la tormenta in terms of prices. According Daniel Cuervo, general secretary of the national promoters association (APCE Spain), “the market is working very well. Sales already signed are being maintained normally, which is very important because we have the product that is under construction at the moment sold in a 85% approximately. Regarding new sales, we are receiving positive information from companies, since reservations and sales are taking place, although at rates much lower than those of a normal situation”.

Echavarren también espera un impacto limitado en las nuevas construcciones residenciales y asegura que “the price will remain reasonably stable both this year and in the coming years, provided there are no significant variations if the subrogations of the promoter loans are not put at risk by the banks”.

The areas with the steepest falls

Lacalle, for example, focuses primarily on zonas de segunda residencia, beach locations and regions with higher unemployment, while from Funcas they also see that the price is likely to fall sharply in the areas with the highest population density in the main urban centers (especially after the confinement is increasing the interest of the metropolitan areas or municipalities near large cities, where the buyer can opt for larger homes for the same price and even less) and those homes that, regardless of where they are located, have poca luz natural, "For the trauma that confinement has left", Torres details.

In that same line, José Luis Álvarez Arce, Professor of Economics at the University of Navarra (UNAV), insist that "It is evident that the demand for housing will decrease in the hand of the economic recession, increased unemployment and uncertainty about how health and economic events will evolve in the near future. Added to this is the lower demand that can be expected from non-residents given the less mobility that we will find in the coming months.. This will especially affect housing in tourist areas ”.

By last, la APCE explica que el principal impacto se producirá “in those areas with the highest unemployment rate and destruction of business fabric, as is logical. Anyway, We understand that those areas where the real estate development activity was already present were locations with sufficient demand and markets with considerable dynamism.. Conversely, those areas that do not have large cities and no second home market, whose situation prior to the health crisis had little activity, they may have it more difficult”.

At the moment, la previsión es que se mantenga este año y parte en 2021, although everything will depend on how the health crisis evolves (that there are possible outbreaks, that the vaccine is late…) and how the economy is responding in the coming months.

In this sense, Pedro Abella, director of the Executive Program of Management of Real Estate Companies of IE Business School, maintains that "the demand of the housing market remains strong, despite the break, and the scarce supply, so it is expected that there will be a recovery between 9 and 12 months, as long as the evolution of the covid-19 continues downward and without regrowth ”. Also, do you think the fact that la situación de la economía y del inmobiliario es más sólida que cuando estalló la crisis de 2008, which "will make the impact in the short and medium term not very serious and also have the help of national and European institutions".

His thesis is shared by the director of conjuncture of Funcas, who rules out a prolonged sinking because "several factors contribute to put a floor to the recession: low interest rates, high potential demand especially among young people, demographic and sociological dynamics, international investors attracted by urban centers, whose prices are still lower than what is observed in other international capitals”. However, insist that, even though the market starts to lift its head in the fall, and as long as there is no regrowth that requires new confinement measures to be applied, the collapse of the sale has not hit bottom, and “it will be necessary to wait some time to recover the lost ground from the start of the alarm state, because high unemployment and the fear of losing a job will continue to drag down demand ".

Usually, experts highlight that the level of professionalization of the real estate sector and the low level of debt of the business's reference companies are other factors that will help limit the impact of covid-19. Y también recalcan que la previsible caída de la construcción de nuevas viviendas (that could reach 40%; this is, at levels of about four years ago), reducirá cualquier riesgo de sobreoferta en la promoción de obra nueva.

In any case, the consensus believes that 2022 it will be the first year in which the market returns to the precovid situation, aunque desde Colliers creen que la ‘recuperación plena’ del mercado it could take four to five years to arrive, "Once our country reaches a similar level of occupation and unemployment as we had at the beginning of the year", Echavarren clarifies, which warns that only in this year the decline in merchanting will be around 30%.

His vision coincides with that of Gonzalo Bernardos, Professor of Economics at the University of Barcelona (UB) and real estate analyst, who remembers that “the recovery of the housing market always lags behind that of the economy. The same thing happens with falling prices. In the first quarter of 2021, the price will keep falling and, instead, the economy will already grow at a high rate”. In your opinion, We won't see last year's residential prices until the end of 2023.

For his part, Remax predicts a drop in operations between the 10% and the 30% year-on-year, depending on the geographical area, and a relatively quick recovery. "It seems that this is a much more seasonal crisis than the previous one of the 2007, that it will be less serious in terms of the real estate market and that it will last much less time ”, adds the real estate network.

A more moderate drop in rents

Usually, el mercado cree que a muchos potenciales compradores les será imposible acceder a una vivienda en propiedad, so they will be forced to go to the leasing market, that was already carrying an excess demand before the arrival of the coronavirus. Thus, experts don't see a significant drop in rents.

"It is evident that prices are going to have to drop, because those who are not in the ERTE process have lost their job or are at risk of losing it. But the demand will remain very high because the rent se convertirá en el refugio de los que no van a poder comprar, especially in big cities. We come from a clear lack of supply in the main economic and demographic nuclei and the demand will probably increase., reason why it is logical that sharp falls in the rent do not take place ”, think Beatriz Toribio, directora general de la Asociación de Propietarios de Vivienda en Alquiler (ASVAL).

Bernardos, meanwhile, believes that “there will be many more rental operations in 2020 what in 2019. On the one hand, many drops in rental amount. AND, for another, cambio de viviendas de alquiler caras por otras más baratas, concentration in the same house of former tenants who each lived in a different…” Sus números prevén un decrease in rental price close to 13%.

The same is defended by the director of the Executive Program of Management of Real Estate Companies of IE Business School, who stresses that "the rental market began to have a lot of pull before the break, for reasons such as difficult access to financing due to its conditions or lack of savings for the "entry", increased mobility in youth, due to changes in concepts such as collaborative economy or pay-per-use, and the increase in single-parent families by decision or divorce. These criteria have been maintained and have even been strengthened and, so, it is foreseeable that it will continue with force, especially due to the extreme lack of supply (and specifically the affordable rental) and the possible tightening of financing conditions ”.

As the experts explain, One of the factors that will most affect the pull of rental demand is la previsible caída de la firma de hipotecas, as a consequence of the fact that banks will tighten the requirements when granting new loans for the purchase of homes in a scenario of increased risk of unemployment and a general decline in the purchasing power of citizens. So, throughout the year a decrease in the formalization of new operations in the environment of the 30%.

"Money is scary and lending it more. Banks suffered a lot during the Great Recession and many entities continue with the adjustments derived from it. These months of mortgage defaults must be resolved, but hopefully the financial sector will be even more cautious, hence the potential of the housing rental market ”, IE Business School expert stresses.

Bernardos believes that the granting of mortgages will fall even more than the sales (30-35%), as a consequence of “noticeably lower demand, because when there is a crisis families tend to increase their savings in relation to their income, and a stricter criterion in the granting of mortgages. Families who work in SMEs and whose income does not reach 2.500 euros will have a harder time getting a mortgage”, incide.

Experts send a message to the Administration to ask them to take advantage of the opportunity that every crisis brings and place rental as one of the spearheads in the economic recovery, employment and investment.

"The rent, both in the free market and in the public with affordable prices, it is a market that is not yet developed in Spain. That is why national and foreign investors are so interested in entering and betting on this model.. AND deberíamos aprovechar esta oportunidad para continuar con el impulso that it seemed he was having before the arrival of the health crisis. In the end, it is a stronger and more flexible market than that of the purchase and it would be important to lay the foundations for when the recovery comes, that will come sooner or later, and to face future crises ”, Toribio stresses.

In your opinion, la apuesta por el mercado del alquiler “permitiría attack multiple fronts: on the one hand, the need to facilitate access to housing and, for another, generate economic activity, create jobs and attract new investments ”. But for this, it considers essential that there is a stable legal and regulatory framework that guarantees investors, as well as reducing administrative obstacles, streamline aid to those affected by the impact of the coronavirus and implement tax incentives for both small and large homeowners to bring their empty homes to the market.