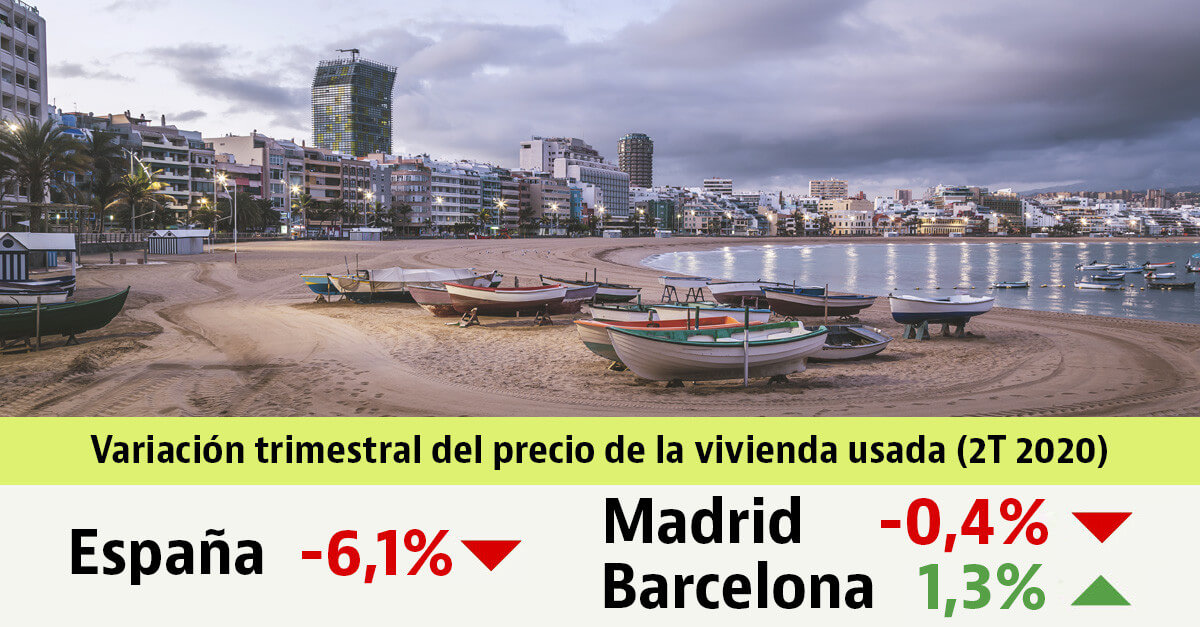 The price of used housing for sale marks a drop in 6,1% during the second quarter of 2020, the largest decrease in the historical series of idealista. Taking into account the annual variation, the decrease is from 4,8%. This descent leaves the square meter in 1.650 euros, according to him latest price index from the main real estate portal in Spain. While, the main trading markets showed differences: in Madrid capital prices gave a 0,4%, but in Barcelona a 1,3%.

For Fernando Encinar, idealista head of studies, “although it is still too early to know with certainty how the coronavirus crisis has affected the real estate market, the second quarter report shows, at the national level, the biggest drop in prices since idealistic we have records. However, the data in the report seem to support what we have been advising for since weeks of idealista: despite the fact that the market expected a strong general price adjustment, It seems that not all areas of the country will have a homogeneous behavior”.

“We may come back, as in the previous crisis, to a Spain at different speeds. Just like what happened between 2008 and 2014, the Spain that fills up, in which the demand is concentrated, supported mainly by investors and which is a generator of employment (Madrid, Barcelona, Málaga, Valencia, the Mediterranean coast and the archipelagos) could not experience the price drops so relevant that they will affect the Spain that is emptying, reaching a faster recovery than in the previous crisis. In any case, until after the summer we will not be able to see if these data confirm or not the trend that they point”, specifies the spokesman for the real estate portal.

During confinement, only the Balearic Islands saw their prices grow by 0,4%. In all other communities, the expectations of the owners were lowered. The biggest fall took place in Catalonia, where the price dropped a 8%. Then, the decreases of Navarra are located (-7,9%), Castilla la Mancha (-6,9%) and Aragon (-6,3%). In the Community of Madrid, the fall was from 2,3% in this quarter.

Only three provinces have experienced price increases this quarter. The largest has occurred in Soria (8,8%), followed by Guipúzcoa (0,4%) and Balearic Islands (0,4%). In all the others, prices are lower than those registered at the end of winter. Lleida marks the biggest fall (-10,1%), followed by Granada (-8,8%), Tarragona (-8,2%), Navarra and Toledo (-7,9% in both cases).

The capitals have had a less bearish behavior than the provinces: 21 of them have increased prices during this quarter, in full alarm for the coronavirus. The biggest rise is registered by Soria (9,3%), followed by Cuenca (6,3%) and San Sebastián (6,1%).