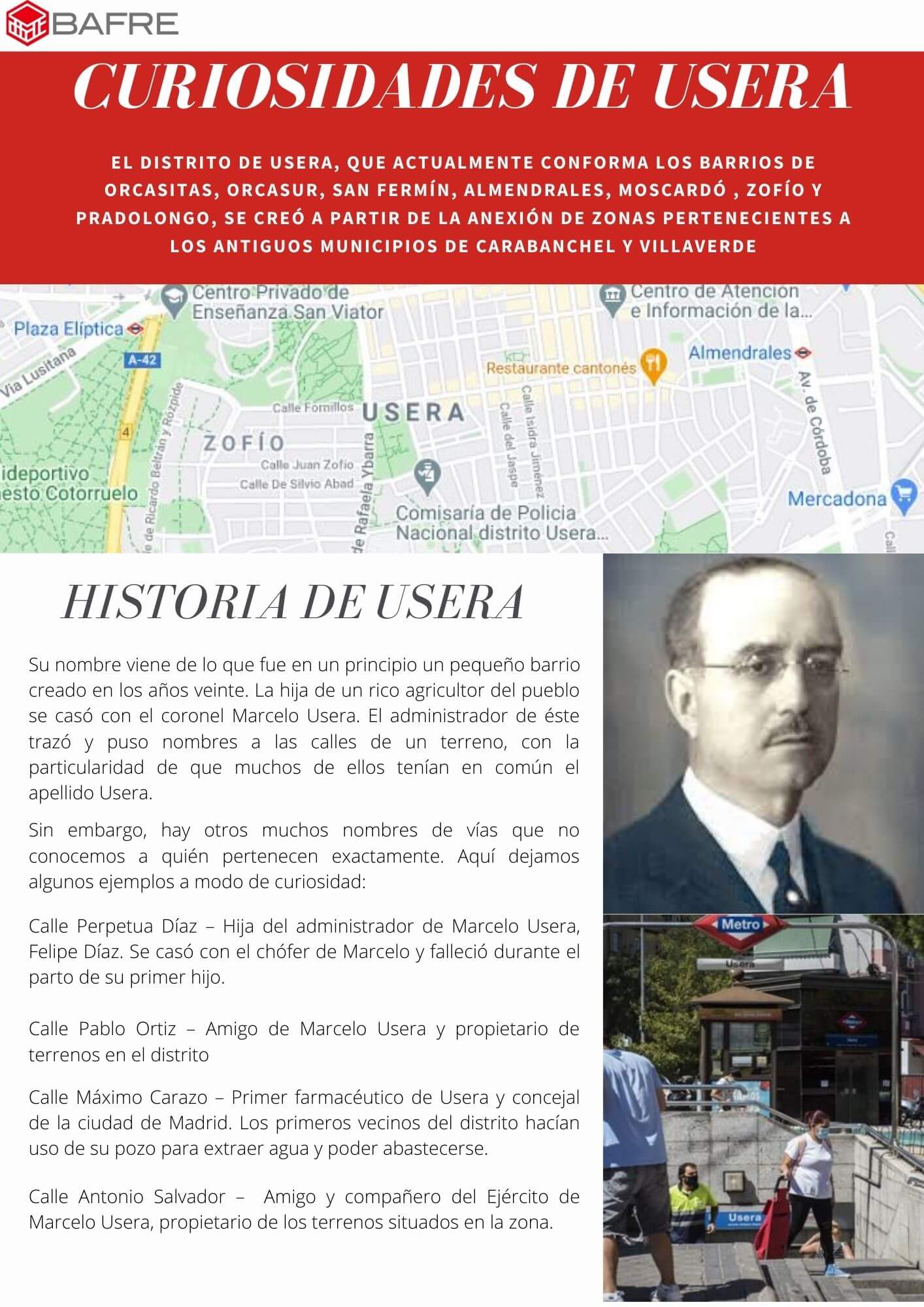 We inaugurate a new section on the neighborhoods of Madrid, where unusual stories of all kinds are hidden. We start with the District of Usera.

The Usera district, that currently makes up the neighborhoods of Orcasitas, Orcasur, San Fermin, Almond trees, Moscardó , Zofío and Pradolongo, It was created from the annexation of areas belonging to the former municipalities of Carabanchel and Villaverde.

Its name comes from what was originally a small neighborhood created in the twenties. The daughter of a wealthy farmer in the village married Colonel Marcelo Usera. Its administrator drew and named the streets of a plot, with the particularity that many of them had in common the surname Usera.

However, there are many other road names that we do not know who exactly belongs to. Here we leave some examples as a curiosity:

Calle Perpetua Díaz - Daughter of the administrator of Marcelo Usera, Felipe Diaz. She married Marcelo's driver and died during the delivery of her first child.

Calle Pablo Ortiz - Friend of Marcelo Usera and owner of land in the district.

Máximo Carazo Street - First pharmacist of Usera and councilor of the city of Madrid. The first residents of the district used their well to draw water and be able to supply themselves.

Calle Mariano Usera - Brother of Marcelo Usera and Lieutenant Colonel of the Army.

Calle José Anespere - Friend of Marcelo Usera and one of the first land owners in the area.

Calle Jesús Montoya - He was one of the first inhabitants of the area after the beginning of the urbanization of the land.

Calle Gumersinda Rosillo - This small street inherited the name of one of the first inhabitants in the lonely lands of Usera.

Felipe Castro Street - Deputy Mayor of Villaverde-Usera- Together with Máximo Carazo, took steps to extend the tram line to connect the neighborhood with Madrid, the water supply by the Canal de Isabel II, sewer and cobblestone paving on the district's main street..

Calle Felipe Díaz - Administrator of Marcelo Usera. Parcelled several lands in the district and designed some of the current roads. On the left, his house, one of the oldest buildings in Usera.