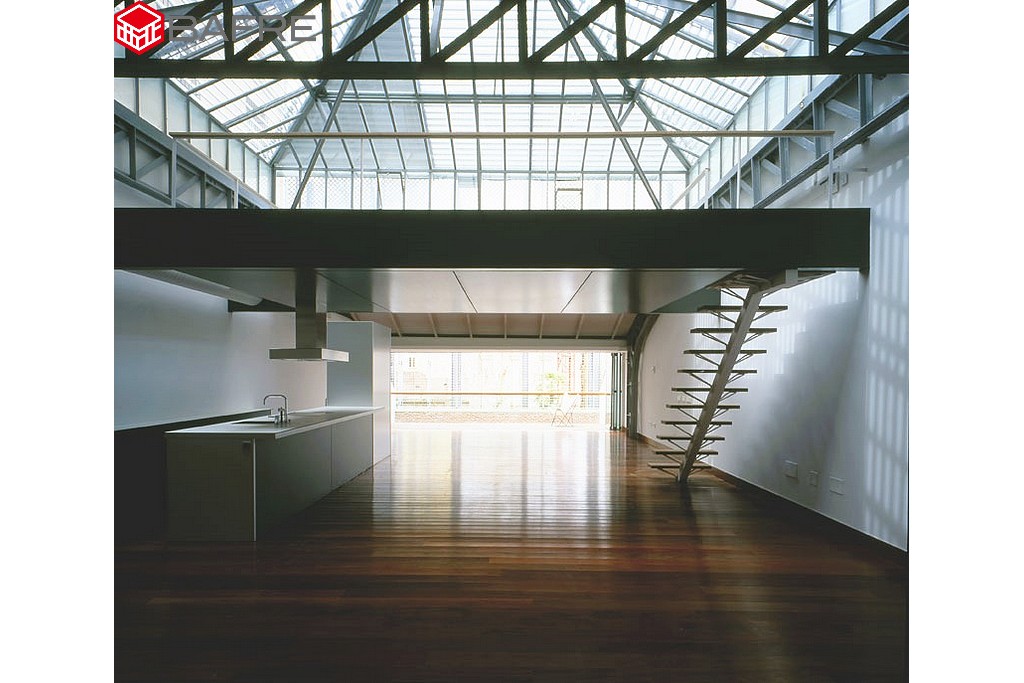 Located in one of the most beautiful and central areas of Madrid, this magnificent property sold by Bafre Inmobiliaria and located in the interior courtyard of a building from the second half of the 19th century, is awarded the National Architecture Prize of the year 2005 for his rehabilitation.

The house is distributed in 120 useful m2. It is located within a unique space crowned with a large skylight and flanked by an exposed metal structure. Open at its bottom in a large stained glass window towards a terrace of 15 m2. AND, beyond, to the adjoining garden.

The project is divided into 2 levels, considering the privacy of the bedroom, but not including closed spaces. This mezzanine is located under the large skylight with a linoleum-covered floor..

Lighting has taken a leading role. The light plays with a neutral and conditioned palette of finishes: the paint that covers the wooden planks of the ceiling and the walls is white and the floor is a solid wood flooring from Ipe. The passage of natural light has been left in the kitchen, the only space with a fixed and established place.

At the top you can find an island of 13 m2 approximately, surrounded by a railing and accessible via a ladder.

Its terrace stands out, with a folding window, which is established from a splendid perspective towards the garden of the Palacio de Viana, previously unavailable due to a neighboring building that was demolished at the start of the project.

In the disposition of the house it has been tried to configure a patterned and continuous space, fluid between differentiated areas, that allows its adaptation to the different forms of use that users want to give it.

This house has individual heating by natural gas and underfloor heating, skylight with safety glass and mechanical seal and IPE flooring. Also, includes the option of a parking space in another building.

It stands out especially for its good location in one of the most central and emblematic places of the capital, next to Atocha street and very close to Puerta del Sol, the exact center of the Spanish capital, where countless shops can be found, bars and restaurants.

It is also located in a very well connected area, one step away from Tirso de Molina stops, Antón Martín and La Latina.

Link to the web: Flat in Conde de Romanones